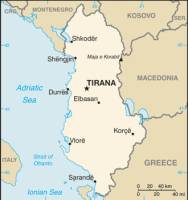 The Republic of Albania is located in southeastern Europe, in the Balkans. The inland is mainly mountainous and difficult to access (70% of the country) while the coastal areas are low-lying.
More information on Wikipedia)

The Albanian population is being considered as a young population. Its average age is 31.7 years old. After 1990 the Albanian population has faced new phenomena like migration, which greatly affected the distribution by districts and prefectures. Districts in the North have seen a decreasing population, while Tirana and Durrs districts have increased their population. In July 2007, Albania's population was 3,600,523, with an annual growth rate of 0.73%. Albania is a largely ethnically homogeneous country with only small minorities.[44] The largest majority of the population is ethnically Albanian.
More information on Wikipedia)

The dominant language is Albanian, with two main dialects, Gheg and Tosk. Many Albanians are also fluent in English, Italian and Greek, although we had quite some trouble communicating back in 2007.

The area of today's Albania has been populated since prehistoric times. In antiquity, much of it was settled by the ancient Illyrians, possible ancestors of Albanians.
In the 2nd century BC the region that is now Albania was added to the Roman Empire.
In the 15th century, despite fierce resistance, the country was conquered by the Turks. Shortly before the start of the 1st Balkan war, Albania gained autonomy and on November 28, 1912, Albania declared its independence, but that was not without a struggle since France and Russia were strongly against this.
In 1921 the country became an independent republic, but after the Second World War it joined the communist Eastern bloc and was firmly ruled by the convinced Stalinist Hoxha.
Under the influence of the uprisings throughout the Eastern bloc, Albanians were also given more freedom in the early 1990s and in 1991 the first free elections were held.
At the end of the 90s, a civil war almost broke out that was just prevented by new elections.
The country is gradually becoming more democratic and reforms are being implemented. Albania is now a prospective member of the EU.
We have decided not to write a detailed history anymore, since we would have to cite other sources that are often on the internet already. Instead a few links with more information about Albanian history:

Due to the large geographical differences, the Albanian climate has a fairly unpredictable character. The lowlands along the coast have a Mediterranean climate with hot summers, mild winters with rains. In the mountainous east, a continental climate dominates with harsh winters with lots of snow and rain in the summer. The sheltered basins have a milder climate.

Plants:
Due to the large differences in altitude, soil types and climate, Albania is blessed with a very rich and varied flora. There are 3221 species counted divided into two clear groups. The border runs from north to south via Shkodra to Leskovik. To the west of this line there is a typical Mediterranean flora (around 355 of the total number of species), and to the east in the mountains we come across a typical mountain flora. All over Albania there are 489 species that are typical of the Balkans, of which around 40 that occur only in Albania, including the asphodel, the Balkan dioscorea, the wild driada and the Salix reticulata, a willow species.
The vegetation on the coastal plain has a Mediterranean character. More inland, between 700 and 1000 meters in height, is a zone of oak, beech and chestnut forest. Between a height of 1000 and 1800 coniferous forests dominate and above 1800 meters one finds mainly alpine meadow vegetation.
Oak forests make up 20% of the total Albanian forest stock. In other parts of the country, up to 800 meters high, Mediterranean shrubs are dominant: myrtle, strawberry tree, heather and mastic tree. In the warm southwest, disc cactus, laurel, fig tree, black hornbeam and eucalyptus grow.

Animals:
In the woods with oaks and conifers, ferrets, wolves (around 400 specimens), foxes and jackals are found. Brown bears, tree martens, lynx and weasels live in the higher pine forests. Deer, chamois and wild boar are found in some areas, and Albania has no fewer than 14 species of bats and 350 bird species (including migratory birds). Typical Albanian species are crows, sparrows, shoveler, two species of partridges, pheasants and heron species. Migratory birds resting in Albania are nightingales, storks, cuckoo, larks, thrushes, geese, pigeons and woodpeckers. Albania has many species of birds of prey, such as eagle, falcon, buzzard, sparrow hawk, little owl and eagle owl.
There are 260 species of fish in the Albanian rivers. In several lakes, including Lake Ohrid, there is a unique trout, the so-called "Quran".
There are different species of snakes on land, including the highly poisonous Balkan viper, the water snake and the Montpellier snake. Furthermore, many species of toads, frogs, salamanders, lizards and two types of turtles. Scorpions are found in southern Albania.

For a long time Albania only had economic contact with the Soviet Union and China, but after the breakup with both countries it became mainly self-sufficient. The economy then fell sharply and a deep crisis followed in the 90s. Many people lost their money through investments in pyramid schemes that collapsed in 1997. Since then, the economy has gradually recovered, but Albania is still one of the poorest countries in Europe.
More information about the economy of Albania can be found on Wikipedia

For a long time Albania was barely accessible to tourists, but this has changed more and more in the last 20 years and in 2011 Lonely Planet declared the country one of the best destinations. Among other things, there are archaeological remains but the tourist infrastructure is not yet well developed.