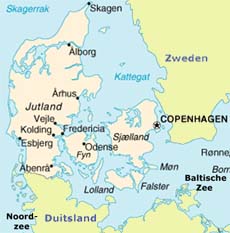 The kingdom Denmark (Kongeriget Danmark) is situated in northern Europe, a peninsula north of Germany, bordering in the west the North Sea, in the north the Skagerrak and in the east the Sont and the Baltic Sea. Next to the two large islands Sjaeland and Fyn there are almost 500 small islands of which more than a hundred are inhabited. The surface is about 42,000 square km, a little bigger than Holland. The coastline is 7314 km. long thanks to the many bays and fjords. The border on land with Germany is only 68 km. long. Denmark has 5.3 million inhabitants.
The Faroe islands and Greenland also officially belong to the Danish kingdom.
Situated in the heart of the Gulf Stream in the North Atlantic, the Faroe Islands lie northwest of Scotland and halfway between Iceland and Norway. The archipelago is composed of 18 islands covering 1399 km2. There are 1100 km (687 miles) of coastline and at no time is one more than 5 km (3 miles) away from the ocean. The highest mountain is 882 m (2883 ft) above sea level and the average height above sea level for the country is 300 m (982 ft).
Since 1948, the Faroe Islands have been a self-governing region of the Kingdom of Denmark. It has its own parliament and its own flag. It is not, however, a member of the European Union and all trade is governed by special treaties. It has 48,000 inhabitants.
Greenland is the largest island of the world with a surface of 2,175,000 km2, of which 340,000 km2 free of ice. It is situated northeast of Canada and has about 56.000 inhabitants. The highest point of Greenland is 3700 meters.

Denmark has about 5.3 million inhabitants (2001), of which one-quarter (1.4 million) live in Copenhagen. The population density is about 124 per km2. Almost 90% of the population lives in cities. Except Copenhagen there are Århus (265,000), Odense (173,000) and Aalborg (155,000). Life expectancy is averagely 77 years. 3% of the population is foreign, most of them being German and Scandinavian. On South-Jutland there is a small minority of German-speaking Danes.
Remarkably, almost two-thirds of the population has a surname ending with -sen (son). Almost 23% of the population have Jensen, Hansen or Nielsen as their surname.
On the Faroe islands live about 48,000 people and 56,000 on Greenland (2001). Population density on Greenland is averagely only 0,16 per km2 (only the ice-free areas counted!), but in reality most people live in a few cities and villages.

The official language of Denmark is Danish. On Greenland people speak Greenlandic, an Inuit dialect, and Faroese is the national language on the Faroe islands. Faroese is rooted in Old Norse. Nordic languages are readily understood by most Faroese, and English is also widely spoken, especially among the younger people. A minority in South Zuid-Jutland speaks German.
Danish, Swedish and Nowegian resemble one another, but the sounds are quite different.
The letters æ, ø, and å come after the z in the ABC. Spoken Danish has sounds and pronunciations that no other language has.
English is the predominant second language and many Danes also speak German.

The weather is maritime and quite changeable, from moments of brilliant sunshine to misty hill fog, to showers. The Gulf Stream encircling the islands tempers the climate. The harbours never freeze and the temperature in winter time is very moderate considering the high latitude. Snowfall occurs, but is shortlived. The average temperature ranges from 3°C in winter to 15°C in the summer. The winds are mainly coming from the west but when they come from the east it can be very cold in the winter (to -30°C) and very hot in the summer (up to 35°C).
Averagely Denmark has 600 mm precipitation a year. Because of the many depressions the west coast has storm more than 50 times a year.

Flora
Denmark used to be covered with woods after the last ice age, but about 5000 years ago, man began clearing the forest for agricultural use, and together with a decline in the temperature the forests slowly changed. At the beginning of The Subatlantic Period for about 2.500 years ago the Beech (Fagus sylvatica) became the dominant forest tree as it is today. Through grazing of domestic animals and expansion of the cultivation, the landscape became open and a lot of light-dependent plant species immigrated to the fields and grassland. Some of these plants may have followed the agriculture from south and south-eastern Europe.
Today all of Denmark is more or less cultivated. Only the coasts has natural vegetation. Intensive cultivation of fields, grassland and forest leaves only a few species of plants, but in many spots the cultivation is extensive with a very rich and interesting vegetation. There are about 1500 species of plants.
Fauna
In 1995 the National Forest and Nature Agency estimated the number of free, naturally occurring and breeding species of vertebrates in Denmark at 424, including 49 mammals, 209 birds, 5 reptiles, 14 amphibians, 37 freshwater fish and 110 saltwater fish. Far more uncertain is the estimated number of invertebrates, put at 21,000, of which insects alone account for 18,000. In 1997 the Danish catalogue of plants and animals most in need of protection showed that 54% of these had their habitat in the forest. This includes, for instance, the pine marten, 15 species of woodpeckers, the Aesculapian snake and 964 species of beetle. These latter make up 26% of the beetles in need of protection.
Marine animal life is rich and varied: Plankton, such as jellyfish and copepods float in the water; nekton such as porpoise, cod, herring and plaice swim around freely; sea-bed fauna can be divided into in-fauna in the seabed such as cockles and lug worms, and epi-fauna on top of the seabed such as common mussels, crabs and starfish.

This thoroughly modern market economy features high-tech agriculture, up-to-date small-scale and corporate industry, extensive government welfare measures, comfortable living standards, and high dependence on foreign trade. Denmark is a net exporter of food and energy and has a comfortable balance of payments surplus. The center-left coalition government has reduced the formerly high unemployment rate and attained a budget surplus as well as followed the previous government's policies of maintaining low inflation and a stable currency. The coalition has lowered marginal income tax rates and raised environmental taxes thus maintaining overall tax revenues. Problems of bottlenecks, and longer term demographic changes reducing the labor force, are being addressed through labor market reforms. The government has been successful in meeting, and even exceeding, the economic convergence criteria for participating in the third phase (a common European currency) of the European Monetary Union (EMU), but Denmark, in a September 2000 referendum, reconfirmed its decision not to join the 11 other EU members in the euro. Even so, the Danish currency remains pegged to the euro.

Agriculture
Two-thirds of the country is used for agriculture. Most products are exported to the European Union. Most farms are rather small with less than 20 hectare. Because of high-tech there are less and less people working in this sector and more land is now being used for touristic purposes. Important products are potatoes, sugar beet and coleseed. Denmark is ahead of Europe concerning biological agriculture. A quarter of the milk the Danes consume, has been produced in a biological way.
Horticulture produces mainly fruits, vegetables and herbs.

Fishing
Denmark is one of the largest fishing countries in Europe, although agriculture produces more revenues. Codfish, flatfish and herring are the main species which are caught and processed into fishoil, fishmeal and canned fish. Most fishproducts are exported to Germany. The main fishing harbors are Esbjerg, Hirtshalsen and Skagen.

Import
Important importpartners are: European Union (72%, Germany and Sweden being the most important), Norway (4.2%) and the US (4.5%). The main importproducts are: machinery and transportation means, semimanufactured products, capital goods, chemicals and consumer goods.

Export
Important exportpartners are: European Union (66%, Germany and Sweden being the most important), Norway (5.8%) and the US (4.5%). The main exportproducts are: semimanufactured products, machinery, meat, fish and ships.
Infrastructure
The road network has a length of 70,000 km. of which almost 7,000 km. consists of highways. The railroad network has a length of almost 3,000 km. Bridges are an important part of the Danish traffic system. There are ferries to Sweden, Norway, Germany and Britain.

Most tourists use Denmark only as a way through country to Sweden and Norway. Denmark has not as many touristic attractions as many other European countries have and tourism is not a very important means of income.
Yet, Denmark has a lot to offer to the visitor, especially in and around Copenhagen, but there are also amusement parks, museums and many other attractions throughout the country.