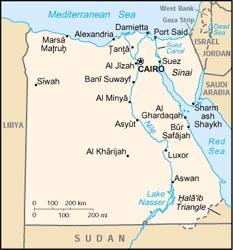 In the north Egypt borders to the Mediterranean Sea, in the west to Libia, in the south to Sudan. East of Egypt are the Red Sea and the Gulf of Aqaba and to the northeast Egypt borders to Israel and the Gaza Strip. Remarkable is the very narrow inhabitable Nile Valley going from south to north, while more than 95% of the country consists of deserts. The main part of Egypt lies on the African continent but the Sinai belongs to Asia.
More information at nationmaster.com.

More than 90% of the population is of Eastern-Hamitic origin but has been totally arabised. The largest minority is formed by the Nubians (about 6 million people) who mainly live in southern Egypt. There are also some small groups of Berbers and Bedouin nomads. A few million Egyptians live and work in Kuwait, Iraq and Bahrain.
Almost 34% of the population is younger than 15. The average life expectancy for men is 67 years and 73 for women.
More information at nationmaster.com.

Almost 98% of the population speaks Egyptian-Arabic, a dialect of the Modern Standard Arabic. It is also the most important Arabic spoken since Egypt produces most of the Arab films, tv-series and music. Almost everyone in the countries where Arabic is spoken can understand an Egyptian. There are some minorities which speak Nubian, Berber and Coptic.
Look at ethnologue.com for more information about the languages in Egypt.

Egypt is well known for its long recorded history and the many monuments that still can be seen. We have decided not to write a detailed history anymore, since there is already a huge amount of information on this topic on the internet. Instead a few links with more information about Egyptian history:

Egypt has a desert climate with hot, dry summers and moderate winters. Difference in temperature in the day and night can be quite big. The hot summer starts in May while in November the mild winter starts. Rainfall is very sporadically and only falls in the north.
More information at 1uptravel.com.

The valley along the Nile is a highly cultivated landscape where date palms prevail. And of course the protected lotus and papyrus, sumbols of Egypt, grow near the Nile. The most common animals are the many fish species in the Nile and the Red Sea and there are many bird species. In the deserts still live some wild animals.
More information on the flora and fauna of Egypt can be found at this website.