Our travels through Europe

We like to travel by car, to have all the freedom to stay or go on any time. That means also we limit our travels mostly to Europe and we found that even this small part of the world is big enough to keep us travelling for a lifetime and has so many beautiful places to offer. So we invite you to join us on our travels and look at the photographs or read the travelogues. But maybe you like to make the jigsaw puzzles of our holiday photographs! 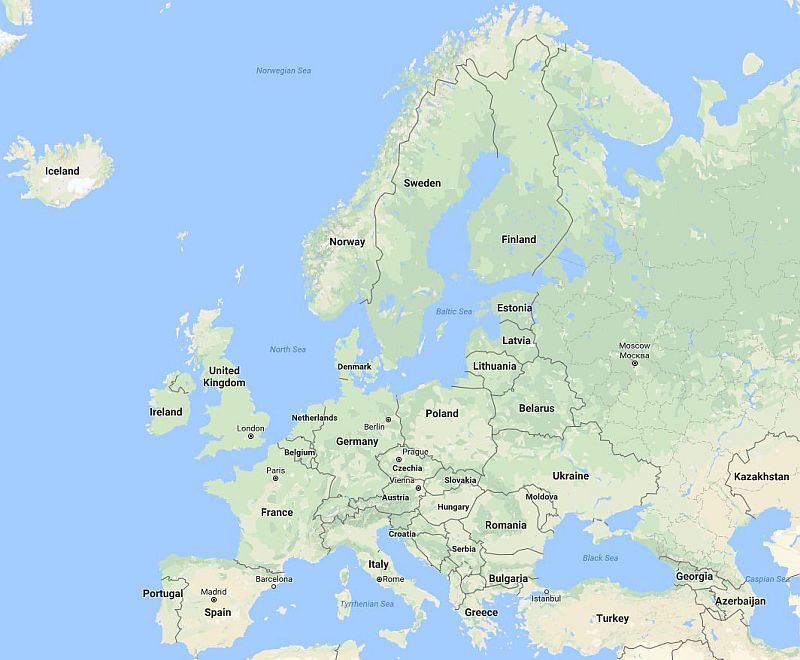 Here a list of all European countries (some of which are partly in Asia but also considered belonging a little bit to Europe). There are more, but the autonomy of some, like Kosovo, is still debated. There are also some autonomous regions which we don't mention here, unless we have been there. As you can see on the list we still have quite a lot to visit.
In this list are 51 countries (including Gibraltar and Vatican City) of which we have visited 34 together. Although we would like to put Scotland as an independent country on the list, we didn't do so, but it has it's owen menu since we have been there so many times.
Albania
We have visited Albanie only one day, in 2007. A poor country with friendly people.
Andorra
We visited Andorra for one day in 2001, a small mountainous country.
Armenia
Armenia regained independance in 1991 and lies between Europe and Asia
Austria
We visited Austria (and Vienna) in 2003 for a week.
Azerbaijan
Azerbaijan in the Caucasus is lying partly in Europe and Asia
Belarus
Belarus declared independence on August 25, 1991
Belgium
In 2005 we stayed for a week in Belgium but we are often there
Bosnia and Herzegovina
We went one day to Bosnia and Herzegovina in 2007
Bulgaria
Bulgaria is one of the countries we still have to visit
Croatia
We have been several times to Croatia, in 2003, 2004 and 2007
Cyprus
In 2001 we visited Cyprus for 10 days
Czech Republic
In 2003 we spend almost a week in the Czech Republic
Denmark
On holiday in Scandinavia we spend a few days in Denmark
Estonia
Estonia is still on our list of countries where we have to go
Finland
In 2002 we spend almost a week in Finland
France
In 2006 we traveled for three weeks through France
Georgia
Georgia lies on the border between Europe and Asia
Germany
Germany is our neighbour, so we go there now and then for short visits
Gibraltar
We visited Gibraltar when we were on our way to Portugal in 2001
Greece
We have been 5 times to Greece now but we still have to publish 1 travelogue on the website
Hungary
In 2003 we visited Hungary for a week
Iceland
We still didn't find the time to visit Iceland
Ierland
In 2002 we traveled through Ireland for a 10 days
Italy
In 2004 we traveled two weeks through Italy
Kazakhstan
Kazakhstan became an independent country on December 16, 1991, the last Soviet republic.
Latvia
We hope to visit Latvia soon
Liechtenstein
Teije has been to Liechtenstein once, but we didn't go there together, yet
Lithuania
LLithuania is high on our list of countries still to visit
Luxemburg
In 2007 we stayed in Luxembourg for a week
Macedonia
We have driven through Macedonia a few times and visited Skopje for a short time
Malta
Malta is an island nation that we still wish to visit
Moldova
We have never been near Moldova yet
Monaco
We visited Monaco one day when we were on holiday in France
Montenegro
We visited Montenegro in 2007 for a few days
Netherlands
Well, here we live, and now and then we go on holiday in our own country
Norway
In 2002 we spend two weeks in Norway, a marvellous country
Poland
In 2003 we traveled through the south of Poland
Portugal
In 2001 we spend a few weeks in Portugal
Romania
Romania is another country we still have to visit
Russia
Russia sounds quite far away, but we will go there one day
San Marino
We visited San Marino when we were travelling through Italy in 2004
Serbia
We have been for several days in Serbia but haven't published it on the site yet
Slovakia
In 2003 we visited Slovakia, only too short
Slovenia
In 2007 we spend almost a week in Slovenia
Spain
In 2001 we traveled through Spain and later visited Barcelona several times
Sweden
In 2002 we traveled through Scandinavia, vitising Sweden as well
Switzerland
In 2000 we spend almost a week in Switzerland
Turkey
Turkey is still on our country-wishlist
Ukraine
In Hungary (2003) we were only a few kilometers from Ukraine away...
United Kingdom
We visit the United Kingdom almost every year, on our regular Scotland trip
Vatican City
We visited Vatican City when we were travelling through Italy in 2004